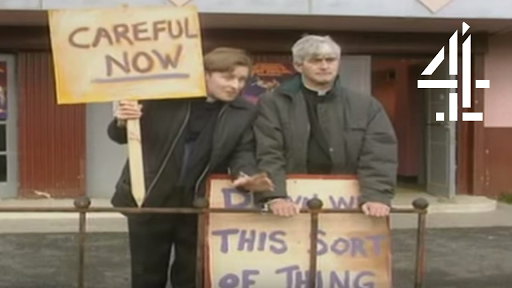 Ever since Ted & Dougal protested against the blasphemous Passion Of St Tibulous in the hillarious sit-com Father Ted I've insisted on using the Irish pronounciation of the word Film (fill-um) so as I'm going to review two films set in Ireland now seemed a good time to use that alternate spelling as well - the connection between both films is that they are rooted in the process of making and recording music
Fullum #1
Sing Street
Conor "Cosmo" Lawlor is a young Irish lad in the 80s whose life takes a turn for the worse when, due to his family's monetary issues, is forced to transfer to a strict Catholic school run by priests (worth noting that the main priest also played a priest in Father Ted).  Unable to afford shoes he is picked out by the teachers and by the bullies alike until in an attempt to impress a girl he claims to be in a band and want her to star in a video.
All he needs now is a band and some songs.
The film then shows the journey as Cosmo makes friends with a small group of musicians (including one who looks a lot like he's meant to be The Edge as he was in the 80s), tries on costumes and a range of musical styles until he finds his own all the while trying to win the girls heart.
This is a good, fun film that really captures the excitement of being in a band with some great tunes and some laughs along the way
https://youtu.be/fuWTcmjnEGY
Fullum #2
Once
I've been wanting to see this film since I saw this youtube video of a street musician singing Falling Slowly with Glen Hansard (star of the film and co-writer of the song with his fellow star Markita Iglova)
It tells the story of a dissilusioned Irish street musician who meets a Czech immigrant who persuades him to give his music one more try as together their lives intertwine.  This is a lovely film, shot to feel intimate, as two seperate lives intertwine and influence each other.  Both of the leads are excellent and again the songs are strong.
NB: as both films are a few years old you may struggle to find them but they are well worth seeking out
https://youtu.be/zgZd2i6r45k
Posted by Don't Feed The Pixies at 02:00

Both of those sound great! Now if only I watched movies...

Don't Feed The Pixies
Too much latent creativity is bad for the soul. Too many people allow their ideas to slosh around their heads before evaporating into the ether. To combat this D.F.T.P. have set up this blog to allow vent to all those odd thoughts that keep you awake at 4am and would otherwise go unshared.